This is by far my favorite video that we’ve created at Rush Creek. It was so much fun to make and a great way to kick off Christmas with our church family.

When our creative team began brainstorming in July for the 2014 Christmas series (yes, I said July), I had a conceptual idea involving a dinner party, lots of chalk, and an unexpected twist. The idea was a little “out there” and the team was a somewhat skeptical at first as to it’s direction and plausibility. However, I was convinced that we could turn the concept into a reality that would be perfect for the series. After a little more development and detailing with our incredible staff, we had a game plan…and it was going to take some work!

The first hurdle for the day was to set up an outdoor, Christmas themed dinner party set. This took a TON of work and volunteers. Throughout the day, we used close to thirty people to make the entire video happen. We had already rented a light truck, so we loaded the furniture and decor up into the back and headed to our location. This entire process took around six hours.

We tasked our actors with a difficult mission: smile. Now this may seem like an easy job, but it’s more challenging than one might think. You have to seem happy, but not over the top. Oh, and we needed them to keep the perfect facial expression for about four hours worth of shooting!

After we finished our inside shots, we moved everyone outside to the dinner party set. Everything looked awesome and the chalk drawing went off without a single problem. And you would never know by looking at the joyful faces of our actors that they had been sitting outside for two hours in 45 degree temperatures with no coats! We did try and use a few space heaters!

All in all, we had an great time together. Even though the shoot was long and tiring, it was one of the highlights of the Christmas season for me. Sometimes it’s hard to believe that this is part of my job! 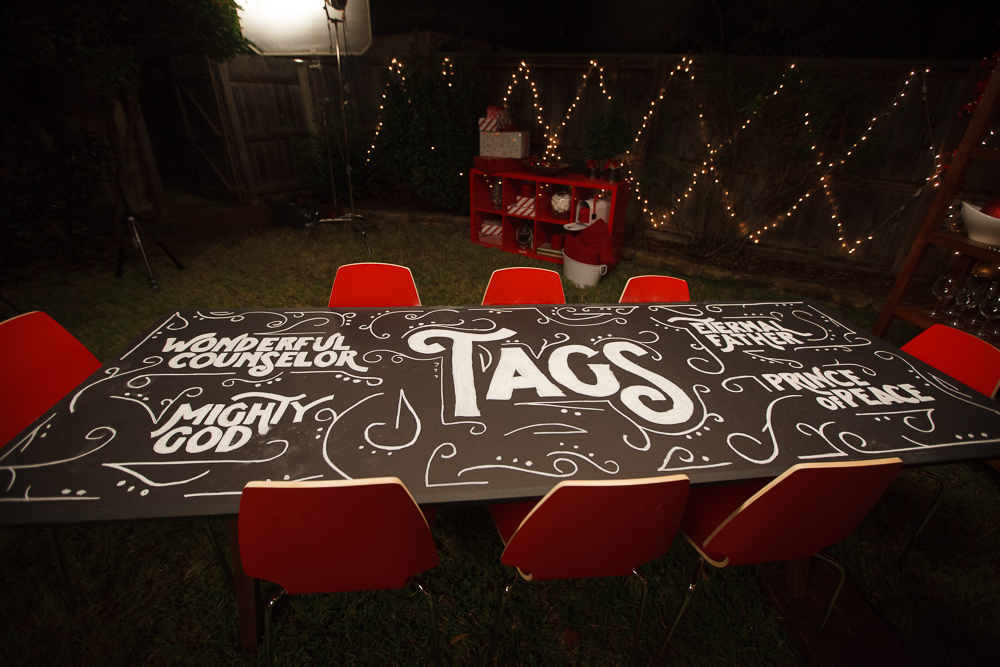