Our 2015 summer book study series, Wanderings, kicked off our journey through Numbers this past Sunday. When the Israelites left Egypt, they ended up wandering in the wilderness for 40 years even though their destination was only about 240 miles away. Why? God was teaching them faith and obedience. They encountered several hardships in their journey, many of which were outside of their control. However, they also rebelled against God with sinful attitudes and actions.

When trying to communicate this struggle, we wanted the promo to have a modern day feel of wrestling with life:  both with events outside of our control and also our own personal tendencies to run towards sin. We set up a storyline of a woman faced with some unknown medical issues, and the resulting angst/fear leads her towards struggles with alcohol and implied adultery. The final “reveal” shot of her on the couch tied back into the theme and look of the series…with her overwhelmed in the midst of the wilderness.

Most of our storyline video capture was pretty straight forward, easily gathered in controlled environments. Capturing the final “reveal” shot, however, was a little tricky. We found a great location along the creek tree line by the church and rented a 34ft boom lift from Home Depot. Unfortunately, due to excessive rain the week before we weren’t able to get the lift to the precise location we mapped out. We ended up having to set the lift up in the parking lot and capture the wilderness scene as best we could from there.

All in all, we had a great time and ended up with a product we really liked. I even got a shot of Trey as a martian (not sure why he ended up green)! 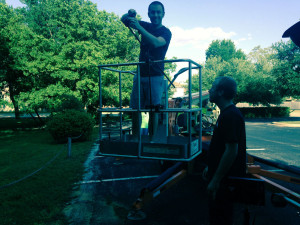